Ronald Shannon Jackson was an American composer and jazz drummer who was based primarily in New York City. Jackson played music - beginning with piano - from a young age in Fort Worth, Texas. Having played his first professional gig with the saxophonist James Clay at the age of 15 Jackson went on to gain a full music scholarship at New York University when he was 26 years old. From the late 1960s through the early 1970s Jackson played with a variety of musicians as part of the avant garde music scene that was flourishing in the city at the time, including with the composer, double bassist and pianist Charles Mingus, the saxophonist Ornette Coleman and alongside the pianist Cecil Taylor. In 1979 Jackson formed his own band The Decoding Society that blended avant garde jazz with elements of funk, rock, pop and ethnic music and was associated with Ornette Coleman’s “new fusion” and “free jazz” styles of the time. The Decoding Society achieved critical acclaim for the distinctive quality of Jackson’s sound and the lineup featured a variety of accomplished musicians throughout its existence into the late 1990s. During this time Jackson also collaborated and performed as part of a number of renowned musical outfits, including as a member of the free jazz supergroup Last Exit and alongside the guitarist Bill Frisell and bassist Melvin Gibbs as part of the avant garde trio Power Tools. Jackson continued to perform, tour and collaborate until his death in 2013. Jackson appeared with The Decoding Society for a double bill that included the experimental composer Scott Johnson as part of The Kitchen’s “It’s Not the Meat...” music series in 1980 and as part of an homage to the influential Italian composer and organist of the Renaissance to Baroque period, Giovanni Gabrieli, later that year. For more information visit: http://www.ronaldshannonjackson.com/ 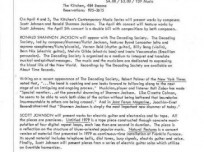