Robert Gober (b. 1954 Wallingford, Connecticut) is a visual artist best known for his sculptures and full-room installations, which make use of domestic and bodily imagery. Gober started making artwork in the mid-1970s, working primarily with paint before expanding his practice to create subtly surreal sculptures of everyday objects. Over the years, Gober has received a great deal of critical acclaim: in 2013, he was honored by the Hammer Museum, Los Angeles; he has participated in five Whitney Biennials; and he represented the United States at 2011 Venice Biennale. At The Kitchen in 1980, Gober performed “Out of the Ordinary” with choreographer Johanna Boyce, an early example of his career-long experimentation with the quotidian. 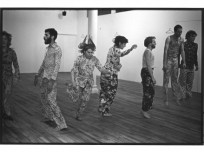