Randy Warshaw is a choreographer and dancer whose work departs from the modern traditions of the Judson Church Group. While studying dance in college, Warshaw became fascinated with the methodology of contact improvisation in a class taught by Steve Paxton. He went on to join Trisha Brown’s dance company, later starting his own, the Randy Warshaw Dance Company in 1987. The company has toured throughout the United States and Europe, and his works have been commissioned for several dance companies. Warshaw performed with his company at The Kitchen for a four-night run in 1991. 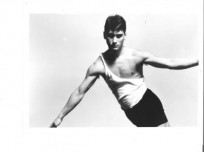