Ralston Farina, the invented name with which Steven Robert Snyder liked to be called, was defined by performance critic John Howell as one of the three “prophets of performance art,” together with Carolee Schneemann and Jack Smith. When Farina moved from Philadelphia to New York at the end of the 1960s, he began performing at the Poetry Project at St. Mark’s Church under the name Steve Raven, a pseudonym that he had taken on during his time in Philadelphia. Rejecting the art object and eschewing video and photographic documentation, Farina was interested in the concept of “time time”—of which he considered to be the “father”—which corresponds to the difference between the experience of the performance and the audience’s recollection of the experience. Sometimes using a timer to frame the duration of his performances, Farina activated objects and improvised with his surroundings, arbitrarily playing with the idea of giving time to the audience. He was one of the first artists who admitted the impact that television had had on his practice, and his experience of stage magic was influential for his works in poetry and performance. In 1974, Farina “crashed” Jean Dupuy’s Soup and Tart at The Kitchen, where his piece consisted of leaving the audience waiting for a minute while he left the room. In May 1980, he performed Aleatoire Je Ne Sais Quoi, also known as An illustrated non-lecture on the phenomenology of my avant-garde aesthetics, at The Kitchen. 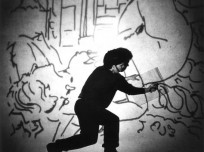