Molly Davies is a video and multimedia performance artist who has been based in New York City since the late 1960s. In the 1970s Davies became well known for her innovative work and collaborations with contemporary choreographers, performers, and composers, such as Suzushi Hanayagi, David Rousseve, and John Cage. Her collaborative film and performance works with Sage Cowels began in 1977 and went on to tour the United States and Europe. Davies’ work creates compelling spatial arrangements that emphasize the movements of the performing body. The viewers are immersed in visual and sound compositions with multiple screens and monitors. She has performed and presented work at The Kitchen throughout her career. Most recently, she presented David Tudor’s Ocean in 1997, which featured monitors showing rehearsals and performances of Merce Cunningham’s piece Ocean with music by David Tudor. Davies currently serves on the board of The Kitchen. 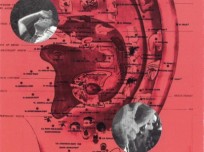