Mike Kuchar is an American artist known primarily for his films and videos. Together with his twin brother George Kuchar, he made experimental, low-budget films whose humerous and campy content went on to influence a wide array of artists most notably including John Waters. In 1998, his films were shown at The Kitchen during Kucharia!, a two-night event screening films by him and his brother, George Kuchar. 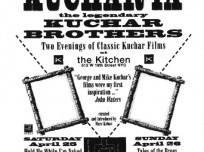