Luigi Ontani is an Italian visual artist who began his career after studying at the Academy of Fine Arts of Bologna in the 1970s. While a photographer, Ontani began to stage tableau vivants, photographing and filming himself presented as different characters such as Pinocchio, Bacchus, Dante, and Saint Sebastian. His photography anticipated and inspired many artists of the 1980s, including Cindy Sherman. Ontani continued to stage tableau vivants until 1989, simultaneously working on sculptural projects in plaster and corrugated fiberboard, as well as incorporating his own body into his work in the series of AnamorPoses. Although Ontani has experimented with many media and techniques, his artwork consistently utilizes symbols, myths, and icons to explore the sublimation of the subject. Ontani presented two tableau vivants at The Kitchen: Astronaut in 1979, and bal’OCCHI in 1983. 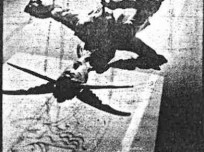