Linda Montano is an American performance artist based in Kingston, NY. Trained in sculpture, Montano began working exclusively as a performance artist in 1971 and started making videos in 1978. Montano’s work is primarily concerned with the relationship between art and life, artistic ritual and processes of personal and spiritual transformation that has been heavily influenced by her Catholic upbringing and her own theological studies. Montano’s performances are often prolonged and durational. For her project “Seven Years of Living Art” (1984-91) she dressed in a single color (each year corresponding to one of the seven chakras) and listened to a specific tone at her Kingston home, appearing at the New Museum, NY, once a month to offer members of the public ‘art/life counseling.’. Montano has collaborated with the multidisciplinary artist Rachel Martin, the performance artist and sex educator Annie Sprinkle and the Taiwanese performance artist Tehching Hsieh — to whom she was bound with rope 24 hours a day between July 4th 1983 and July 3rd 1984 for “Art/Life: One Year Performance.” Montano has appeared at The Kitchen twice, alongside American composer Pauline Oliveros in 1980 and for a solo performance “House Cleaning, Food, Sex, Money, Death” in 1991. For more information see: http://www.lindamontano.com/ 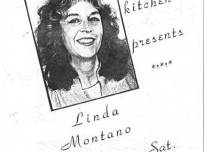