koosil-ja is a Japanese choreographer and performer whose work examines the synthesis of motion and digital technology. Influence by the work of Giles Deleuze, Koosil-ja has worked with a dance practice she has dubbed “live processing” that reveals the physical human form as not only an agent, but also a site of movement. Koosil-ja’s choreography is informed by her manifold experiences, drawing both from her early dancing career under Merce Cunningham in 1981 and from her studies towards a Master of Science degree at the Polytechnic Institute of New York University. Koosil-ja has received the National Endowment for the Arts fellowship four times and the New York Foundation for the Arts fellowship three times, in addition to garnering fellowships from the Guggenheim Foundation and the Asian Cultural Council. Koosil-ja first performed at The Kitchen in September 1987 as Kumiko Kimoto in the band Tohban Djan as part of the series The Hidden Fortress: New Music from Japan. Since then she has regularly presented choreography at The Kitchen. 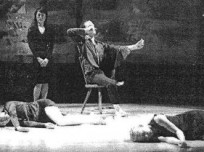