Kiki Smith (1954 - ) uses daring portrayals of the human body to question the relationships between nature, gender, spirituality, and narrative. Working in drawing, print, photography, and sculpture, this German-born American artist has won numerous accolades from such institutions as the Rhode Island School of Design, the Museum of Fine Arts in Boston, the Brooklyn Museum, and the U.S. State Department. Smith embarked upon this successful career at The Kitchen with her first solo show in 1983 entitled “Bending Water,” a sound-image exhibition that presented a highly biological perspective on the human body in medical scans and recordings. In 1993, Smith again returned to The Kitchen through her contribution of a sculpture to Molissa Fenley’s performance of Witches’ Float, which was danced to music composed by Alvin Lucier. 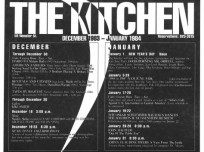