Mx Justin Vivian Bond is a trans-genre artist whose work since the early 1990s has been regarded as droll, pensive, funny and ferocious. Bond, whose preferred prefix is Mx and pronoun is V, is best known for V’s portrayal of washed-up lounge singer Kiki DuRane, half of the duo Kiki and Herb (portrayed by pianist Kenny Mellman), which began performing in 1993. While performing at Kiki, Bond developed a solo career as a singer, emcee, cabaret artist, and actor, moving and working between San Francisco and New York, forming working relationships with filmmaker John Cameron Mitchell, performance artist Jake Shields, and musician Rufus Wainwright. Bond is the author of TANGO: My Childhood, Backwards and in High Heels (The Feminist Press, 2011), has appeared in numerous films and television programs, and has exhibited V’s art in galleries and museums around the world. Bond has exhibited V’s performance and video work at The Kitchen three times in 2007, 2010, and 2013. For more information, visit https://www.justinvivianbond.com/. 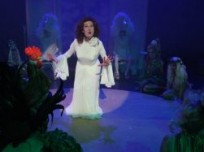