Jonathan Burrows is a British dancer and choreographer whose work draws from post-modern, classical, and folk styles of dance. Upon graduating from the Royal Ballet School, Burrows was accepted into the company as an apprentice choreographer. Under this contract, he created a number of pieces for the Royal Ballet Choreographic Group, the Sadler’s Wells Royal Ballet, Dance Umbrella, and other dance companies. In 1986 he met the experimental choreographer Rosemary Butcher, with whom he continued to work until 1999. After leaving the Royal Ballet, Burrows founded The Jonathan Burrows Group, based out of The Palace Theatre in London. From 1991-1999, The Jonathan Burrows Group made five pieces (Very (1992), Our (1994), The Stop Quartet (1996), Quintet (1996) and Things I Don't Know (1997)). rom 2000 onwards, Burrows broke from the company model of creating dance and began to work collaboratively with other artists. A notable collaboration between Burrows and the composer Matteo Fargion, whom Burrows met in 1989 at the UK International Choreographic Course for Choreographers and Composers, began in 2002 and continued through 2014. Burrows has presented work at The Kitchen twice: once in 1997 when his company performed The Stop Quartet, and again in 2004 when he and Fargion presented Both Sitting Duet. For more information visit http://www.jonathanburrows.info/. 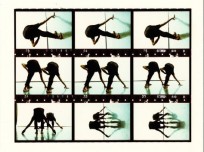