Izhar Patkin’s career has been an on-going expression of the artist’s subjective experience Israeli, European, and American cultural traditions and narratives. Born in Israel but living and working in New York since the late 70s, Patkin has worked across mediums, first garnering attention for his notable Black Paintings and as a sculptor. The visual metaphors in his work draw heavily upon the cultural context as well as the historical conditions and narrative of his times. In the early 2000s, Patkin withdrew from the art world for a decade, following a period of loss after which the artist, in his own words, started living with ghosts. Since his reemergence, his art—which he never stopped producing—has maintained its focus on an exploration of narrative and image in art; and though these themes may seem obvious, they stem from Patkin’s rebellion against the iconoclasty of conceptual art. This conviction goes as far back as his spring of 1981 exhibition at the Kitchen called Collages, which addresses formalist notions of flatness, abstraction, and presentation. 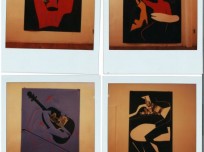