Hal Willner was an American music producer based in New York City. Willner began his career working under the record producer Joel Dorn after he arrived in New York City in the 1970s, after which he segued into TV music production, starting his position as the sketch music producer for Saturday Night Live in 1981. Beginning with “Amarcord Nino Rota,” a tribute album to the Italian composer Nino Rota in 1981, Willner became known for the variety of tribute albums that he produced, which often combined diverse artists and musical styles. These included compilations paying tribute to the jazz pianist and composer Thelonious Monk, the German composer Kurt Weill, and songs from vintage Walt Disney films, and they featured artists ranging from Sun Ra and Diamanda Galás to Sting and Debbie Harry. Starting in the early 1990s, Willner was also involved in the staging of live tribute events. At this time he also began to develop spoken word recordings, which featured a breadth of musical acts and focused on the work of writers such as William Burroughs, Edgar Allan Poe, and the comedian Lenny Bruce. Over the course of his career Willner also worked in film, supervising or producing the music for a number of critically successful films. Willner appeared at The Kitchen in 1987 to present a variety of outtakes from music he did not produce for the “It’s Not the Meat…” music series as part of a double bill that also featured the guitarist Vernon Reid and his band “Living Colour.” 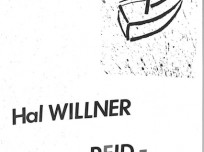