Eleanor Antin (1935- ), is a performance, installation, and conceptual artist, as well as painter and filmmaker. Her works embody a feminist critique of identity that targets the failure of second wave feminism to incorporate issues of class, race, and sexuality. At The Kitchen in 1979, Antin performed as one of her most famous alter egos, Eleanora Antinova, a fabricated black ballerina from Diaghilev’s Ballet Russe. Eleanora Anintova appeared in Before the Revolution, a performance that parodied the dignity of classical ballet, exchanging human dancers for Masonite figures on wheels and sketches for full theatrical sets. Before the Revolution demonstrated Antin’s use of her own physical form to literally perform a critique of traditional identity politics. 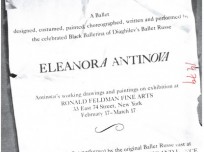