Derek Bailey was an English guitarist particularly noted for his work in experimental and improvised styles. His work was distinguished by its discontinuity, frequent interruptions, and use of amplification as an integral part of his practice. Bailey began playing music at the age of ten, studying with C.H.C. Biltcliffe and John Duarte. He explored free improvised music in 1953, and continued to do so for the rest of his musical career. He was a member of the Jazz Composer’s Orchestra and Music Improvisation Co. Additionally, he co-founded Musics magazine, the record label Incus, and Company, a free improvisation group. He performed at The Kitchen alongside Min Tanaka as part of IMPORTS: Performance Artists from Other Shores series in 1979. 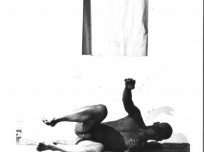