Cauleen Smith is Chicago based artist who refers to herself as an “interdisciplinary filmmaker” as she has taken on roles as filmmaker, screenwriter, and video installation artist. She is best known for her critically acclaimed feature film Drylongso and Afro-futurist cinematic works. Smith’s work often explores, but is not limited to, the intersection of black identity and womanhood and narratives that deal explicitly with how collective memory is built. Smith completed her B.A in Cinema at San Francisco State University and then her M.F.A. at UCLA. She had her first solo show at The Kitchen in 2008 called, The Fullness of Time and also had an exhibition in 2011 of interrelated video works titled Remote Viewing. 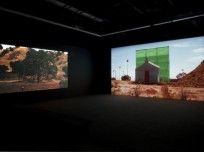