Bruce McLean is a Scottish performance artist and painter. From 1961 to 1966, he studied at Glasgow School of Art and St. Martin’s in London, where he and his friends rebelled against the formalist academicism of the faculty. During these years, McLean abandoned object-oriented studio production in favor of impermanent sculptures and performance art that were often satirical and directed against the art world. In 1978, he performed at The Kitchen with his wife Rosy McLean “The Object of Exercise,” an absurdist choreography highlighting the political ineptitude of various objects. From 1985 to 2012, McLean occupied the roles of senior lecturer and eventually painting department head at the Slade School of Fine Art. Bruce McLean lives and works in London, and continues to show internationally today. 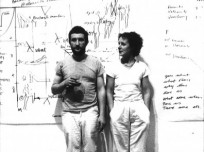