Antonio Muntadas, now called Antoni Muntadas, is a Spanish multidisciplinary installation and media artist. His work addresses social and political issues, specifically communications within mass media and other social frameworks. Having lived in Barcelona under General Francisco Franco’s military dictatorship, Muntadas became aware of the way the media can manipulate the public for control. He is interested in the relationship between public and private space, often intervening in urban spaces with his work in an effort to encourage viewer participation. Muntadas works in a variety of media, ranging from photography and video to web-based work and public installation. In 1971, he had his first solo show in Madrid before moving to New York City. At The Kitchen in 1976, he exhibited his early video work, The Last Ten Minutes. His video installation piece Personal/Public was then shown at The Kitchen again in 1980. He taught at MIT as Professor of the Practice in the Art, Culture, and Technology program for twenty-four years, retiring in 2014 to concentrate on his artistic practice. 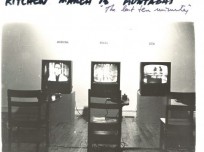