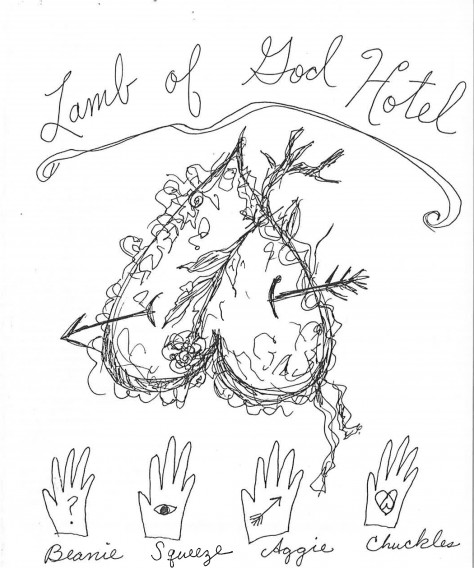 Lamb of God Hotel, an original play written and directed by Karen Finley, premiered at The Kitchen on April 22, 1992, showing on Wednesdays through Sundays at 8:30pm each evening. This play was the first piece that Finley wrote and directed but did not perform in. It was Finley’s second full-length play and her third ensemble piece. The title refers to a recurring metaphor of Finley’s that people are poor “lambs” lost in a corrupt system.

Lamb of God Hotel revolves around four residents of the Lamb of God Hotel—Beanie, Chuckles, Squeeze, and Aggie—and their personal struggles with the abuse and abandonment they have experienced throughout their lives. Chuckles is HIV-positive and struggles with suicide, Squeeze is a victim of rape and incest, Beanie is a victim of childhood sexual abuse who has been kicked out of his home by his wife, and Aggie is a victim of her husband’s abuse. Throughout the 90-minute performance, they role play and reflect upon these past experiences. The motto of the play was “it’s better to feel abuse than to feel nothing at all.”