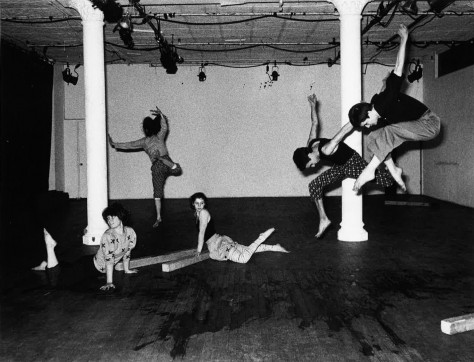 Eccentric Motions was a series by Pooh Kaye that shuttled between the illusionistic space-making capabilities of film and the immanent, embodied potentials of live dance. It consisted of three pieces—Sticks on the Move, a “film-in-progress” by Kaye and Elizabeth Ross, Homelife of a Wildgirl, a solo piece by Kaye combining film and dance, and finally Eccentric Motions, a group dance with sound accompaniment. In the film, wooden beams took on an animacy of their own as they traveled through downtown New York and interacted with people. These beams surfaced, materialized, in the third piece as the dancers chewed on them and spit out the splinters. The relations Kaye drew between objects and performers, or real and filmic space, operated in service of the mythic, creating an environment that did not transport the viewer elsewhere but brought, in the words of Sally Banes, “a preverbal, paradisiac universe” into the extant context.