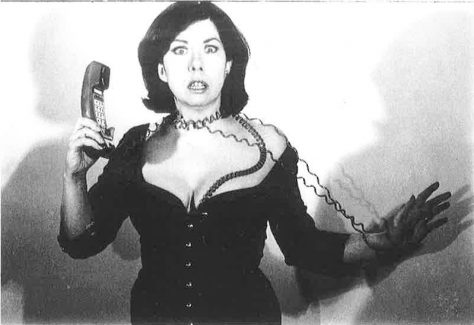 Premiering at The Kitchen, Linda Hill’s one-woman show, Star 69, chronicled her history performing comedy in San Francisco in the 1980’s  when she was stalked by an overzealous fan. Continuing to incorporate fashion similar to her 1996 performance work Too Many Clothes, Hill appeared in Star 69 wearing a bulky seaweed green sweater with matching tights and played three characters—the San Francisco Linda, in-therapy Linda, and her imaginary protector Miss Angel Drake. Referring to the telephone redial system, Hill conceived Star 69 based not only on her own experience as a victim but also her observation that “Everyone, male or female, has had a similar experience. A lot of women quit performing because they get harassed.” Hill’s dark comedy Star 69 was a mix of vintage comedy, audiotape recordings, phone statistics, alter egos, and stalking statistics. Directed by David Simonds, this multimedia performance featured production design by Matt Hausmann, sound design by Sam Carter, and costume design by Patrick Shaw.