Active between 1977-1981, Theoretical Girls was a New York based No Wave band formed by Glenn Branca and Jeffrey Lohn. Although the band never signed to a record label and played only twenty shows throughout its short-lived career, Theoretical Girls is well-known today as an early No Wave group that pioneered the combination of classical modern ideas of composition with punk rock. Always confrontational and often funny in an aggressive way, the band's sound consistently displayed the influence of American minimalist composers, ranging from sparse, clattering rhythm pieces that sound like immediate forebears of early 1980s Sonic Youth, to abrasive slabs of art-punk noise music. The band was comprised of Glenn Branca on guitar, Margaret Dewys on bass, Jeffrey Lohn on keyboard and Wharton Tiers on drums. 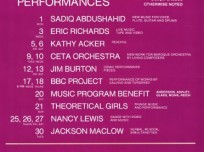