The Swans were an American experimental rock band originally active from 1982 to 1997, led by singer, songwriter and multi-instrumentalist Michael Gira. Their music is noted for its brutal and hardcore sound that edged on heavy metal. They released their eponymous EP in 1982 on the label Labour. Its plodding tempos and distorted guitar work is reminiscent of both post-punk aesthetics and the No Wave music scene of New York City. The Swans were particularly known for their extremely loud live shows that were frequently stopped by the police, which happened at their performance at The Kitchen in 1982. 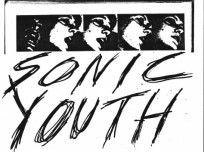