Born in 1949, Robert Kushner is an American painter and founding member of Pattern and Decoration movement in the 1970s. His work is known by combining natural, representational elements with abstract, geometric forms and use of vivid color schemes and bold, fluid drawing. Since 1980s flowers and leaves have become Kushner’s main theme of his works. Kushner has been featured in three Whitney Biennials and two Venice Biennales, and is in the permanent collections of the Metropolitan Museum of Art in New York, the Tate Gallery in London, and Museum Ludwig in St. Petersburg, among others. Throughout the 70s, Kushner presented a number of works in the Kitchen, including “The Masque of Clouds, An Opera in Three Acts and 132 Variations,” with Tom Johnson and “The Persian Line.” For more information, please visit: http://www.robertkushnerstudio.com/ 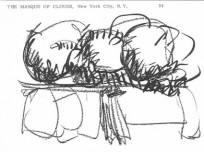