Richard Winberg is best known as Richard Move, his adopted stage name. Winberg is an American choreographer, dancer, performance artist, actor, and filmmaker. He is perhaps best known for his performances as Martha Graham titled Martha@. He founded the dance company MoveOpolis! and has been commissioned to make work for Mikhail Baryshnikov, the Martha Graham Dance Company, and New York City Ballet, among others. As a dancer Winberg has performed with Pooh Kaye, Dancenoise, Karole Armitage, and Koosil-ja. He has directed a number of films including Bardo, Bloodwork - The Ana Medieta Story; and provided choreography for the television series Strangers with Candy. 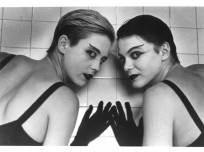