Olga Mesa is a dancer, choreographer, and visual artist based in Strasbourg, France. Her work is notable for its innovative merging of audiovisual work with live dance performance. Originally from Spain, Olga Mesa presented her first solo dance pieces in New York from 1989-1991. During this time, she performed as a dancer in Margarita Guergue and Hahn Rowe’s collaboration, “We Were Never There,” presented at The Kitchen in November of 1989. She attended the Merce Cunningham School and went on to collaborate with Andrea Lerner and perform with John Jasperse. Although she returned to Spain in 1992 to work on her first full length work, she came back to the United States in 1995 and debuted her work “Solos” at The Kitchen. She is now the founder and creative director of Compagnie Hors Champ, a company that creates choreographic and performative works. 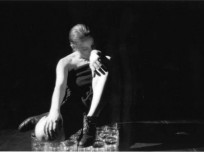