Klaus Lutz was a draftsman, performer, filmmaker, and printmaker. From Switzerland, he moved to New York in 1993, where he stayed until his death in 2009. His work often contains language drawn from the Bauhaus and agitprop films of the Russian avant-garde. At the same time, with its dense layers and allegorical meanings, Lutz’s work maintains an autonomous quality. He used stop-action animation, rotating turntables and various lenses in order to achieve a hectic, dreamlike delirium effect with double and triple exposures. In 2014, three videos and several works on paper by Lutz were exhibited at The Kitchen in the show Selected Stories. For more information, please visit http://www.klauslutz.ch/. 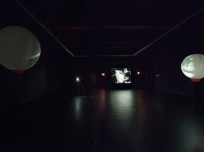