Judy Nylon is a multidisciplinary performance artist from Boston, Massachusetts, based for most of her career in London. Nylon toured with John Cale, formed the punk duo Snatch with Patti Palladin, and is credited by Brian Eno for inspiring his creation of ambient music. Her collaboration with Crucial on the album Pal Judy, produced by Adrian Sherwood, established her as a punk icon. In addition to her contributions to the London punk scene in the 1970s and ‘80s, Nylon also creates performance art and installation work that touch on political, social, and personal realities. She presented several such pieces at The Kitchen at the height of her career; for example, Nylon performed The Hand that Rocks the Cradle at The Kitchen in 1978 the same week that she played at CBGB with John Cale. 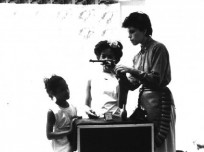