Jerome Bell is a choreographer based in Paris whose works are performed globally. He is known for his provocative pieces influenced by performance art that challenge the conventions of dance presentation. His works cleverly and irreverently strip dance to its essentials, often working with people traditionally seen as “nondancers.” Bel approaches the question of mastery from an unexpected perspective that democratizes dance and views the ordinary as the virtuosic. In Véronique Doisneau (2004), a theatrical documentary on the work of the dancer Véronique Doisneau from the ballet corps of the Paris Opera Ballet, the image of the “star” is decentered and re-examined. In the video Doisneau talks about herself and her career, interspersed with moments of dance. In the understated climax, Doisneau performs a corps de ballet role from Swan Lake, alone. In this context, her supporting role becomes an exquisite solo. In 2005 Bel won the Bessie Award for his work The Show Must Go On in which a combination of twenty trained and untrained dancers perform to a playlist of pop music, the choreography responds literally and comically to the lyricisms. This idiosyncratic work includes a number of thematics present in Bell’s work; it challenges the illusionistic space of the stage and the mystique of virtuosity while still remaining humorous and deeply human. In June 2016, The Kitchen presented the Jerome Bel on the occasion of Crossing the Line Festival produced by the French Institute Alliance. This performance was in conjunction with the presentation of The Show Must Go On from 2001 at The Joyce Theater and the premier of MoMA Dance Company at The Museum of Modern Art. 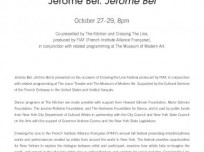