Harold Budd is an American composer and musician whose work has been variously described as minimalist, ambient, and atmospheric. Budd began composing in 1962 and went on to write the experimental drone pieces "Coeur d'Orr" and "The Oak of the Golden Dreams" before retiring in 1970 to teach at the California Institute of Arts. He returned to performance two years later and went to compose works with Brian Eno, working with him on several albums including Pavilion of Dreams (1978), The Plateaux of Mirror (1980) and The Pearl (1984). His later work, much of which was for piano, highlighted his atmospheric style through his use of soft pedal to create slow and sustained sounds. Budd went on to collaborate with a number of other artists including The Cocteau Twins, Robin Guthrie, John Foxx, David Sylvain, among many others. In 1980 Budd performed his Preludes pieces for piano at The Kitchen on a shared evening with Jon Gibson. 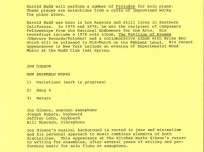