Born in Kingston, Ontario, in 1956, Gordon Monahan is a Canadian pianist, composer of experimental music, and sound artist. From avant-garde concert music to multimedia installation, Monahan’s works focus on the musicality and pushing the boundaries of conventional instruments and electronic devices such as loudspeakers, computer-controlled sound systems, and kinetic sculptures. Since the late 1970’s he has created sound works that juxtapose media technology with the environment and elements of natural forces, including wind, water vortices, indoor air draughts, and human physical strength. Meanwhile, Monahan has also created site-specific sound installations such as Long Aeolian Piano (1984-88), Music From Nowhere (1989), and Sounds and the Machines That Make Them (1994). His interest in high and low tech and high and low culture has led him to collaborate with other musicians and artists like Laura Kikauka and the Berlin-based group Fuzzy Love. Since the late 1980’s, the composer and sound artist has performed several times at The Kitchen including Speaker Swinging (1988), Speaker Swinging, This Piano Thing (1990), Multiple Machine Matrix (1995), and Sounds & The Machines That Make Them (1996). 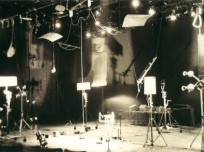