Frederic Tuten is an American novelist, short story writer, and essayist. Many of his essays reflect his interest in contemporary art, and his critical writing for art and film has been featured in The New York Times and Artforum. Tuten attended The City College of New York, where he would later teach, for his undergraduate degree. He went on to study pre-Columbian art history in Mexico and traveled through South America to write about Brazilian cinema. Returning to the United States, he earned his Ph.D. in 19th Century American Literature from New York University. His novels have been praised for his development in experimental fiction, which delve into the nature of beauty and art. Tuten presented readings from his novels at The Kitchen three times throughout the 1990s. 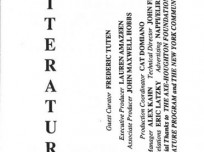 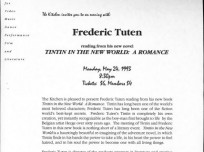