Amy Granat is an artist based in New York who works primarily in film and video. By distorting her film and images with strategies that include physically scratching the surface and/or pouring acid, she creates pictorial and painterly compositions that blur the distinction between film and painting. Her work lends new and provocative ways of viewing film and its mysterious and somber quality often leaves viewers feeling introspective. In 2010 Granat had her first solo show of experimental films at The Kitchen called The Sheltering Sky curated by Matthew Lyons. 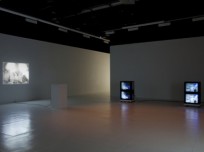