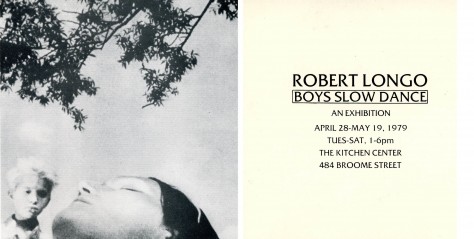 Boys Slow Dance, an exhibition of work by Robert Longo, centered around three painted cast aluminum reliefs, and also included several drawings. Each of the reliefs depicted a pair of male figures in a form of embrace that Longo appropriated from preexisting photographs or film stills who were in Longo’s words, “somewhere between death and dancing.” The relief quality of the central works produces an interplay between the cinematic and the sculptural. They are at once moments in a series of events and moments extracted from time, frozen and monumentalized.