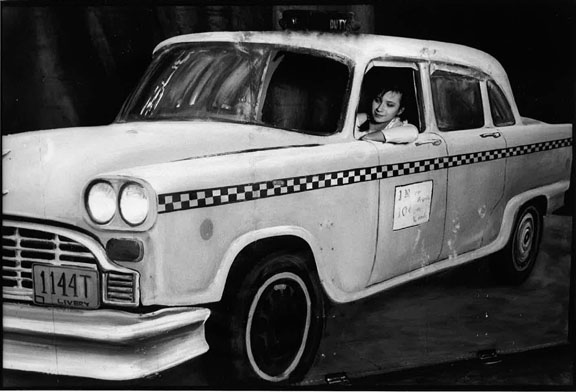 After being exiled from Hungary for their dissenting perspectives, Squat Theatre showed Dreamland Burns at The Kitchen in 1986. The performance, written and directed by Stephan Balint, began with a black and white film chronicling a young woman named Alexandra (played by Eszter Balint) who moved to New York City only to get dumped by her boyfriend Ray (played by Peter Berg) as soon as she arrived. As the Alexandra onscreen fell asleep after a heart-wrenching day, a live play began onstage and followed her into her dreams where a scrim, on fire, framed lifelike mannequins with projected facial features as they played the characters her life. The journey into absurdity ended in deus ex machina via the descent of a neon haloed Virgin Mary. Using unusual spectacle to explore themes familiar to immigrants such as displacement and cultural alienation, Dreamland Burns merged Western avant-garde performance traditions with distinctly Hungarian intellectual perspectives. It featured Eszter Balint, Peter Berg, Jehnifer and Lille Stein, Klara Palotai, Kuba Contarczyk, Jim St. Clair, August Darnell, Bobo Shaw, and Alexandra Auder.