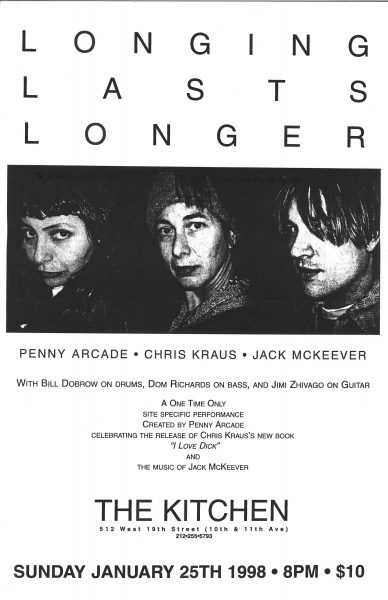 In 1997, Chris Kraus sent Penny Arcade, a performance artist about whose work Kraus had written, an advance manuscript of her upcoming book I Love Dick. Arcade was inspired by Kraus’s story, which featured an example of "Girls who make men nervous. Girls who make men say 'You think too much!' or ‘You're so intense.’" In 1998, Arcade and Kraus teamed up to create an evening at The Kitchen that included a reading of Kraus' text and a poem by John Giorno, all performed above the music of Jack McKeever. Performers included Chris Kraus, Penny Arcade, Jack Mckeever, Bill Dobrow, Dom Richards, and Jimi Zhivago.