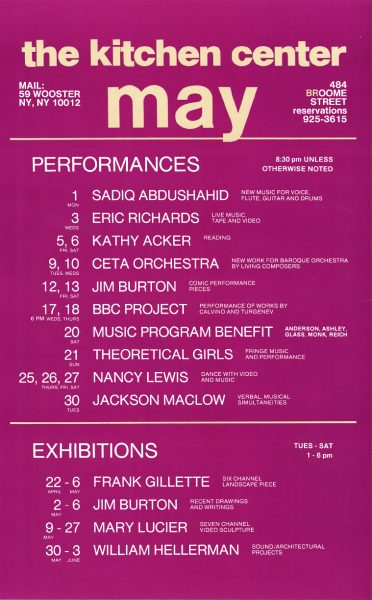 Described in the flyer as “Fringe Music,” Theoretical Girls was a band founded by Glenn Branca and Jeff Lohn, now regarded as a pioneer of New York’s No Wave movement. No Wave was a short-lived underground movement that emerged from the downtown music scene between 1977–1981. Theoretical Girls was known for their aggressive sound, humorous lyricism, and avant-garde combination of minimalist compositional techniques with the abrasive sound of punk rock. This show at The Kitchen was one of the only twenty concerts the band ever performed. Theoretical Girls was comprised of Glenn Branca on guitar, Margaret Dewys on bass, Jeffrey Lohn on keyboards, and Wharton Tiers on drums.