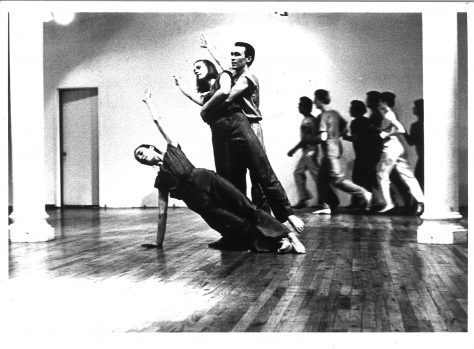 In the premiere of Hero, twelve dancers in gold, orange, and green jumpsuits moved around the edges of the space, framing the central movements of the three soloists: Wendell Beavers, Nina Martin, and Mary Overlie/Joanne Tilleman. The trio wore soft blue and lavender costumes. Overlie, who choreographed the dance performance, alternated still and energetic moves, creating a synergy between the dancers in the middle and the ones in the back of the space. The performance was originally meant to be performed with a new score by Laurie Anderson, but the piece was not ready by the time Hero premiered, so Overlie’s work was staged in silence.