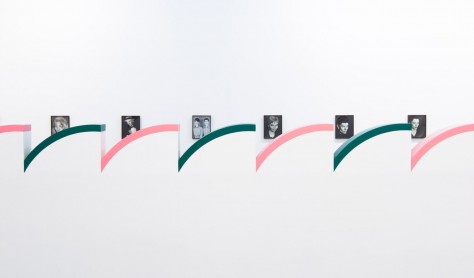 For Untitled (Presence), Elad Lassry’s first show at The Kitchen, the photographer and filmmaker unveiled twenty new photographs, one film—an abstract video work—in the gallery, and a dance-performance piece shown on three evenings in the theater. Lassry collaborated with ten dancers from the American Ballet Theater and New York City Ballet to create pared-down, repetitive movements taken from the corps de ballet in various neoclassical ballets. Both gallery and performance employed sculptural devices that, depending on the viewer’s vantage point, framed and focused the photos and the dancers. For instance, the parabolic portico to the gallery provided a prelude to the brightly colored scalloped walls that centered and decentered the photographs on the back wall. Similarly, the choreographed dance was juxtaposed with ribbon-shaped objects on casters that framed the bodies of the dancers. These aperture-like devices alluded to the perceptual challenge Lassry sought to provoke through the appropriated presence of images—still and moving. Lassry’s foray here into both photography and performance was the first time The Kitchen had given over both its gallery and theater to one artist. Untitled (Presence) was curated by Tim Griffin.