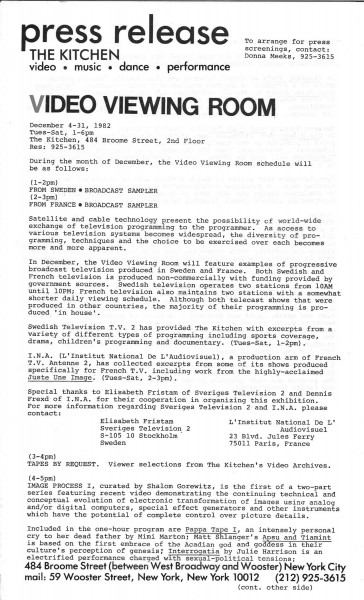 Robert Wilson screened two short films, Video 50 and Deafman Glance, at The Kitchen’s Video Viewing Room in December 1982. Video 50, created for broadcast television, is a compilation of one hundred, thirty-second video clips, and although the content of each clip seems unrelated to one another, the video as a whole creates a surreal and compelling narrative that effectively uses humor and visual drama. Deafman Glance, excerpted and adapted for television, consists of excerpts from Robert Wilson’s silent five-hour opera, telling the somber story of a murder, with a chilling performance by Sheryl Sutton. Both works include music by Alan Lloyd.