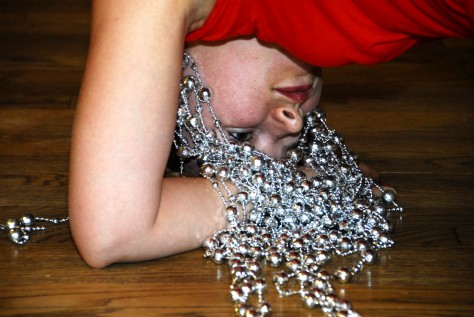 For Blue Liz, RoseAnne Spradlin collaborated with Chris Forsyth to produce a work that collaged dance, video, sound, and images evocative of the 1960s war era in order to convey a sense of the cultural transformation that seized the United States at this time. The diversity of Spradlin and Forsyth's source material is evinced by the title itself, which refers to a poem by Wayne Koestenbaum inspired by Andy Warhol's 1963 painting Blue Liz as Cleopatra. Koestenbaum writes, “Warhol takes Liz and he dyes her blue and understanding that Liz is on the verge of becoming garbage he's going to rescue her . . . and essentially his sensibility is entirely mourning and melancholy, that Liz is lost, she's already lost, and she will never be found, she will never be there.”