Sean Raspet’s works are concerned with the correlation between objects, images, and information, inspired by the fields of philosophy and metaphysics. He has exhibited extensively in the United States and abroad. His most recent projects included A Brief History at Art Basel Miami Beach (2008), The Ones We Work For at Daniel Reich Gallery, and A Modest Proposal at Daniel Reich Gallery at the Frieze Art Fair, London (2007). His solo exhibition As If Written In premiered at The Kitchen in the fall of 2010. 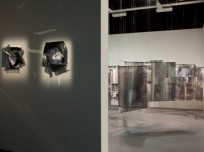