Peter Welz is a contemporary German artist based in Berlin, well known for his work in video, sculpture, and installations. In the 1990s, Welz studied at the National College of Art and Design in Dublin, the Chelsea College of Arts in London and at the Cooper Union. His early works were known for their kinetic set-ups and cinematic quality. However, in more recent work, the relationship between image and space has emerged as a key focal point. His work was shown at The Kitchen in 2006 as part of an exhibition entitled video-sculpture that included a series of collaborations with choreographer William Forsythe. 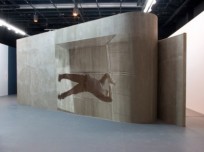