Metropolis Video was a group of video makers who documented the early years of the downtown music scene in New York City, from 1975-1977. They recorded concerts at CBGB, an infamous music club located on The Bowery regarded historically as the locus of the downtown music scene. The New York Times music critic John Rockwell wrote that because of Metropolis Video's work, "the efflorescence of the New York underground rock scene at the CBGB club will live on past the present moment.” In October 1977, Metropolis Videos exhibited at The Kitchen in the two-day show Rock from CBGB, titled in reference to Metropolis Video’s 1975 three part public access television program Rock From CBGB’s. 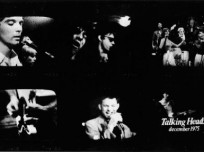