Maria Hassabi is a director, choreographer, and performer. Her works are filled with iconic images that put forth-then move beyond-their initial connotations. With aesthetic precision, extreme physicality and extended duration she creates live installations that push limits of live performance. She received a BFA in Performance and Choreography from California Institute for the Arts in 1994 and attended the Merce Cunningham Studio in New York City. Her choreography has been performed widely in the United States and abroad. She is a 2011 Guggenheim Fellow and in 2013, she represented The Cypress Republic as part of The Cypress and Lithuanian Pavillion at the 55th Venice Biennalle. In 2013, Hassabi also worked with The Kitchen in conjunction with Performa 13 for the production of a new piece, “Premiere,” which explored the indicated performance convention through performance itself. Hassabi debuted SHOW at The Kitchen in 2011. For more information, please visit: http://www.mariahassabi.com 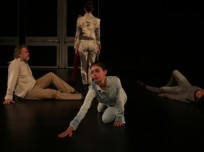