Jerry Hunt is an American artist best known for a series of performances that started in 1978 that combined theatrics and live electronic music. His work is was centered on the exploration of mysticism and the occult, developing into suggestive, ceremonial practices accompanied by music and objects, both created by the artist. In the 1990s, he collaborated on a series of projects with visual artist Maria Blondeel, composer and software designer Joel Ryan, and performance artist Karen Finley. In 1992 his work with Karen Finley entitled The Finley/Hunt Report premiered at The Kitchen. One of the results of the collaboration between Hunt and Finley was The Finley/Hunt Report, a performance premiered at The Kitchen in 1992. For more information, please visit http://www.jerryhunt.org/ 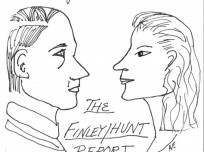