Jack Goldstein was an American artist known for his influence on the New York art world of the ‘80s, and particularly his centrality to what came to be known as the Pictures Generation. Goldstein, who worked in a variety of media including film, performance, and sound, pioneered a style of photorealistic painting that appropriated photographs and reproduced them in airbrush with auto pinstriping tools atop a black canvas. Goldstein’s work, like that of the artists in Douglas Crimp's 1977 Pictures show with whom his work was included, engages representation not as transparent to reality, but caught as an act of transference. Goldstein presented two installations, a performance, and series of films at The Kitchen from the years 1978-1980. For more information, please see: http://www.jackgoldstein-artist.com/ 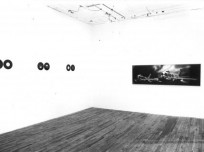