Henry Flynt is an American philosopher, musician, and anti-art activist. Flynt is credited with coining the word “concept art” and often associated with the Fluxus movement, because of his friendship with George Maciunas and overlap with the scene.That being said, he identifies himself as a neo-Dadaist. His work devolves from what he calls “cognitive nihilism,” and his music stems from American ethnic music and hillbilly variations. In addition to music, and anti-happenings, Flynt theorizes on late-capitalist-post-Marxist social and economic theory. Flynt presented numerous evenings of music at The Kitchen in 1972 and 1975. For more information, please visit: http://henryflynt.org/ 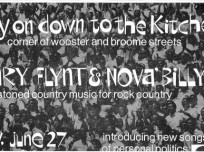