Edouard Lock is a Canadian choreographer and dancer, most famous for his company La La La Human Steps. The company, founded in 1980, presented Lily Marlene in the Jungle at The Kitchen later that year. Throughout his stewardship of the company Lock was renown for his work with the dancer Louise Lecavalier, for whom he created many notable works. Lock has also created a number of films including the internationally award winning Amelia (2004). 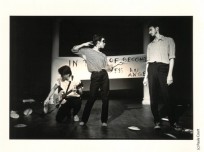